Barbara Redfield began her work as a therapist at the Westchester County Penitentiary in the 1970s under the mentor ship of Jack Cooper, MD a forensic psychiatrist who was head of the Psychosynthesis Foundation. Barbara trained in a wide variety of Therapeutic Modalities including: Behavior Modification, Gestalt Therapy, Art Therapy and Moreno Institute drama therapy. During her tenure there she spent time with Ram Das who supported the innovative work of introducing meditation techniques to the inmates. She went on to be one of the creators of Odyssey Workshops in Greenwich Connecticut, a personal growth training program originally for women that grew into workshops for men and teenagers, based on Creative Problem Solving techniques, Maslow’s hierarchy of needs, and self scoring inventories of assets. Barbara combined her grounding in the business world from experience in personnel work, journalism, real estate and an innovative “start up” with her personal journey of spiritual awakening. She completed training and went on to supervise and teach for The Pathwork, Core Energetics and Barbara Brennan Healing Institute. She became a trustee of the Pathwork. She produced international conferences and taught in Germany, France, Greece, Mexico, Holland and Switzerland. Her adventures of ever expanding exploration included work with the World Wide Labyrinth Project of Lauren Artress at Grace Cathedral in San Francisco and The Work of Byron Katie. She became an assistant and teacher in both of these organizations. Each of which she added to her personal reservoir of techniques to draw from, as she created her own workshops. Always based on practical realities, the workshops had a broad spectrum of teaching participants how to become their own healer/ therapist/teacher/Guru. Often using the creative process a doorway to one’s spiritual core. Barbara taught frequently at Institutes working with therapists in training how to add the creative/spiritual piece to the medical construct. Today, Barbara is semi-retired. She is creating “votive boxes” and other box constructions to deepen her own journey of self discovery. She gives occasional sessions and workshops where she thinks of herself as a “soul doctor”. Visit her website: barbararedfield.com 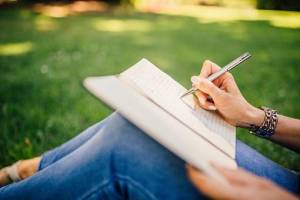 Writing Condolence Letters My father was a Man of Letters. During his years at Princeton, he was head of the Press Club where he was able to supplement his scholarship […]