Home » The Miracle of Stating Your Intent During Your Grief Journey

That tomorrow’s worth the fight

From the song “Miracle” lyrics by Brent Smith and Dave Bassett. From the album Amaryllis by Shinedown

The above lyrics from the song “Miracle” by a musical group known as Shinedown nicely capture the essence of my journey as a parent who has experienced the death of a child.

After my 18-year-old daughter Jeannine’s death in March of 2003, I looked for any source of inspiration amidst the raw pain of my grief, that signaled “tomorrow’s worth the fight”. I regularly asked for signs of her everlasting presence. The signs that I have received and continue to receive has given me life and allowed me to love again.  In the tenth year of my journey, I am secure in the knowledge that Jeannine is a divine spiritual partner, who has become a permanent part of my heart and soul.

The Power of Intent

I have discovered that stating my intent to the universe has contributed to some pretty extraordinary occurrences that have enriched my life and have resulted in greater spiritual awareness. Of course, for the effects of intent to be realized, it is imperative that we walk aware, open to what is presented to us.

I really became aware of the power of intent back in September of 2010 after witnessing an incredible spiritual discussion between three of my dearest friends. During that discussion, I looked up in the sky and stated simply: “I want to be where they are.”

In November of 2010, my request was answered in the form of a highly intuitive interfaith minister who facilitated a spiritual experience that permanently altered how I view death and life today.  The spiritual growth that has continued has been empowering and has brought on most days, an inner peace and contentment with my life, as it exists today.

My most recent encounter with the power of intent occurred in July of this year, prior to my trip to Costa Mesa, California, for the national conference of The Compassionate Friends.  I was more nervous than usual because I was flying on a different airline. I have been accustomed to stress-free flying for the last several years with one particular airline, but discovered that they didn’t have service to Costa Mesa.

As an aside, I eventually discovered that they did have service to Costa Mesa, but typed in the wrong name of the airport in their search engine. As it turns out, I would not have learned further lessons about the power of intent had I flown with my preferred airline to California.

When in Doubt… Call on Crow 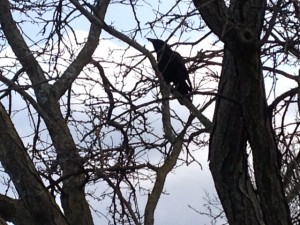 The day prior to my scheduled flight to California, I had a session with a holistic practitioner who is trained in body energy work and shamanistic practices. I told her about my trepidation about flying to California.  Knowing that I have embraced Native American Animal Medicine in my journey, she simply stated; ‘Call on crow medicine to help you through your fears.”

Her suggestion made perfect sense to me, because according to the Native American teachings of Jamie Sams, “Crow is the keeper of sacred law, crow can bend the laws of the physical universe and ‘shape shift.’” * Crow has also been a strong presence for me because of her teachings about the importance of past, present and future in shaping my destiny.  So prior to my flight I invited crow for the ride.

Crow was present on both legs of the trip.  At the midway point of my trip to Costa Mesa, I looked out the window of our plane and observed a crow flying majestically in the vicinity of the plane. At that point I felt protected and secure in the knowledge that crow would remove any obstacles that would impact on me and my wife Cheri arriving at our destination safely. Crow made her presence known again on the morning of our trip home. As Cheri and I were waiting to board our flight for the first leg of our journey home, we saw a single crow walking around the gate area. She was strutting ,while observing all that was going on around her. Crow was making sure that all systems were go for all of us who were flying that day.   I knew that because of the presence of my sacred friend, my trip home would also be smooth.

Today, I have made a conscious decision to become more aware while embracing a path  that is uniquely my own.  Change has resulted in continued  growth that has kept me alive amidst the challenges presented by Jeannine’s death.

Whatever road you choose to follow, remember to state your intent to the universe along the way.  Stating our intention to the universe and being open to what comes is both a powerful form of prayer, and demonstration of faith.

David J. Roberts, LMSW, became a parent who experienced the death of a child, when his daughter Jeannine died of cancer on 3/1/03 at the age of 18. He is a retired addiction professional and an adjunct professor in the psychology and psychology child-life departments at Utica College in Utica, New York. Dave is a featured speaker, workshop facilitator and coach for Aspire Place, LLC. Dave has also been a past national workshop facilitator for The Compassionate Friends and a past national workshop facilitator and keynote speaker for The Bereaved Parents of the USA. Dave also co-presented a workshop titled “Helping Faculty After Traumatic Loss” for the Parkland, Florida community in May of 2018,in the aftermath of the mass shootings at Stoneman Douglas High School. Dave was also a keynote speaker at The Tom Coughlin Jay Fund Remembrance Weekend during in June of 2019 in Ponte Vedra, Florida .Dave has also done numerous workshops at the local and regional levels related to transformation from grief and loss. He is the co-author with Reverend Patty Furino of the recently published book "When The Psychology Professor Met The Minister" which is available for purchase on Amazon. For more information about their book,please go to: https://psychologyprofessorandminister.com/ Dave has been a past HuffPost contributor and has also published articles with the Open to Hope Foundation, The Grief Toolbox, Recovering the Self Journal, Mindfulness and Grief, and Thrive Global. He is currently a regular contributor to Medium. One of Dave's articles, My Daughter is Never Far Away, can also be found in Open to Hope: Inspirational Stories of Healing and Loss. Excerpts from Dave's article for The Open to Hope Foundation, called The Broken Places were featured in the Paraclete Press DVD video, Grieving the Sudden Death of a Loved One. He has appeared on numerous radio and internet broadcasts and Open to Hope Television. Dave was also part of a panel in 2016 for the BBC Podcast, World Have Your Say, with other grief experts, discussing the death of Carrie Fisher. Dave’s website: www.bootsyandangel.com is devoted to providing support and resources for individuals experiencing loss.

Choose to Live Again; Your Loved One Would Want ThatPrevious Post
Using Memoir Writing to Deal with GriefNext Post