I sat with my father for the last time on Thursday, the 18th of December, 2008. His condition was not much different from the past several days; he was sleeping and unresponsive. For so many days now, I’d been sitting at his bedside, holding his hand, talking to him and wondering if he even heard me anymore. Watching him breathe. There was so little life left in him.

I was scheduled to leave the next morning on a 6 am flight to Colorado to see my daughter graduate from CSU. I had a feeling he wouldn’t be here anymore when I returned on Sunday.

After turning on one of his favorite CDs of Tahitian music, I sat by his bedside and held his hand. I sang and hummed along with the music I’d heard a million times, as he used to play that CD over and over again before he began to slip away so completely. I told him once again that he didn’t have to keep fighting.  I told him not to worry about Mom – that we’d keep taking good care of her. I told him I loved him and what a good dad he’d been, what a great family he’d created. What an extraordinary life he’d led, winding his way from Quebec, Canada, all the way down here to Arizona! He really had had some adventures in his time.

My eyes wandered to a poster of a palm dotted white sandy beach and azure sea that we’d tacked to the wall by his bed. I asked him if he remembered his trip to Tahiti, his time in Hawaii, and all his years of sailing. “Wouldn’t it be nice to just drift away on a beautiful blue expanse of sea?” I asked him. “To just let go and let the wind fill your sails as you glide over the waters? It feels almost like flying, doesn’t it?”

The rest of the day was busy, getting Mom picked up from dialysis and settled back at home and then visiting with a dear friend who lives in the same retirement complex as my mother. The parking lot was strewn with golden fall leaves as I walked out to my car at the end of the day. With the sun just beginning to set, each leaf seemed to glow. It was quite beautiful. 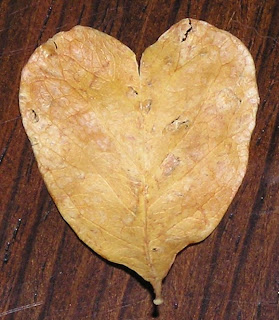 One leaf in particular caught my eye. It was a perfect heart shape. “Well, look at you,” I said, as I bent to pick it up. None of the other fallen leaves were heart shaped. They were more ovalish and elongated.  I craned my neck and looked at every tree surrounding the parking lot. Not one of them had heart shaped leaves. I smiled and said an inward hello to my son Cameron. He’d been sending me hearts since just after he died in 2004 and I felt him there with me. When I got into the car and started the engine, the radio played Michael McDonald’s version of “Your Love Keeps Lifting Me Higher.”

Claire Perkins is a Transformational Arts Coach and award-winning author of The Deep Water Leaf Society: Harnessing the Transformative Power of Grief (Intuitive Journey Press 2008). After losing her eldest son to a drug overdose in 2004, Claire embarked on a conscious and creative journey of healing and personal growth. By using a unique combination of dream work, journaling, expressive arts and inner guidance, Claire learned that within this deep experience of grief a gift of profound spiritual transformation awaited her discovery. Claire believes that every loss you experience and every challenge you face can be used to fuel the next cycle of your own personal and spiritual evolution. She offers one-on-one coaching and workshops to help you move through grief into healing. Using gentle but powerful art and journaling techniques, she can help you to find peace with your loss and discover the gifts that may be buried beneath your grief.